The French paragliding championship welcomes you at Montclar, France. It will be held from 1st till 6th of September, 2014 with no rest days. This well-known paragliding site has already hosted the french open 20 years ago in 1994, and the world championship 3 years earlier.

The French paragliding championship welcomes you at Montclar, France. It will be held from 1st till 6th of September, 2014 with no rest days. This well-known paragliding site has already hosted the french open 20 years ago in 1994, and the world championship 3 years earlier. For these happy years, several others competitions took place here among whom a pre-PWC and 2 British open. The "St André-Dormillouse" is one of the most famous distance flight in the Alps, which have been done again and again, with a final rush to the the Serre-Poncon lake after un long ride on the highway of the crests of the Blanche... Serre-Ponçon and Montclar are also famous for its beautiful nature, which allow even water sports, rest in front of a varied landscape, hikes in the mountains, or still descent single road in bike. September is generally a good flighing season, and it promises us a great show during which 120 pilots will push the bar to reach the goal at first ! Good luck, boys and girls...

Take off plateau de La Chau: 1907 m ASL 6°22'20.2" E 44°24'10.8" N
The main take off used for competitions is the "plateau de La Chau", (1900m) just under the mountain of Dormillouse (2500m). The launch is covered in lush grass and is very large. The wind is usually coming from the south-west to north-west. It is possible to fly with south wind and north wind, but it's more difficult to fly away. It's possible to fly good distance from 13h. If you reach the crests, with another chairlift, the take off can be earlier, from 11h sometime, with east breezes before the sun turns to the south. The easier way to leave is to follow the crests to the south (the sky highway to St André les Alpes). The first 25km are easy, until you reach the "Estrop" (2961m). To the north, the "Grand Morgon" (2324) is often a good waypoint after having crossed the serre-ponçon lake during 5km, reaching the crests of "La vieille" (Old Woman crest).
https://goo.gl/maps/gLj988Ao3i62

Take off St Vincent les Forts 1254m ASL - 6°22'17.6" E 44°26'35.7" N
Another famous flight site is not so far, which is called St Vincent les Forts (1240m). It is a small cliff where you land at the side of the car park and then take off again. It works with north wind, even when north wind is too strong to fly elsewhere in France. The launching area made of a green carpet, however it is a bit small for a large competition. Also the area where the pilots can wait for the start is well known and used by many tandem/bi-gliders. The landscape is wonderful, especially in the evening when you are flying in the last solar breeze, with the sun falling on the lake... It's also a site where you can reach easily the top of Dormillouse (2500m), resting on ridgy afforested.
https://goo.gl/maps/uHBnxqwUNmk

Take off Chabanon - 1968m ASL - 6°17'40.7" E - 44°20'03.9" N
The last launching area, Chabanon, can also be reached with a chairlift, from the little ski resort of chabanon, over the village of Selonnet. It works early in the morning, with south or north wind, but is very difficult to leave, because there is no thermal areas working in the immediate area.
https://goo.gl/maps/f4UaDWaKRS82

For free flying, the best time to visit is August and September, with thermal strengh that can easily reach 4m/s at 2pm. The thermal duration : it start from 11h over 2000m, 12-13h at the take off, until 7pm with convergence. The best time to launch is 2pm, when thermals start to be large and easy to take. Competitions will often come earlier in the season when there are less tourists, allowing better access to the facilities for the competitors.

Usual distance flights start from the Plateau de la Chau or St Vincent, then reach the top of Dormillouse (2500m), then turn the north waypoint (Morgon) or the south waypoint (Estrop) and way back to Dormillouse.

The famous distance flight, reaching St Andre from Dormillouse or the other way, is a classic 80km flight, recently done by many pilots during the B-Stof in July 2014.

On non-flyable days, there are plenty of other activities in the area.:
- kiting/windsurfing on the lake
- hiking to the castle on top of Montclar
- downhill biking in Monclar
- market in Seyne

At French Open we are going to use Airtribune new live tracking solution with Android smartphones.
We kindly invite you to join us and use its benefits:
- High quality 1 sec tracking
- Built-in chat with retrieve
- Precise tracklogs as back up
- Possibility to analyse your track in replay right after the flight.

You will have a chance to evaluate the solution at our comp for your further needs.
To use it you need an Android smartphone (version 4+) and SIM card with Internet.
The app uses 50 kb of traffic per hour.An external USB battery allow you to use phone as long as you need regardless the length of the task.

Montclar is located in Provence-Alps-Cote dÁzur region. You can come by A51 from Grenoble and Marcelle, N85 from Paris or N94 from Briancon. The nearest airports are Nice and Geneve.

Airports
The nearest main international airport is Nice (3 hours drive) or Marseille (2 hours). Both airport are serviced by several airlines from around Europe.

An hour's drive from Gap.

St Jean Montclar is about a 10 hour drive from Calais/Dunkirk, about 3 hours from southern France and just under 3 hours from Nice Airport. There are other airports in the region too.

Car hire:
There are a multitude of car hire companies operating out of all the airports. 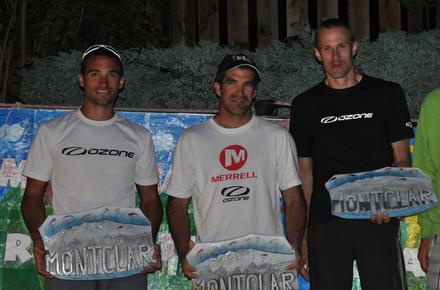 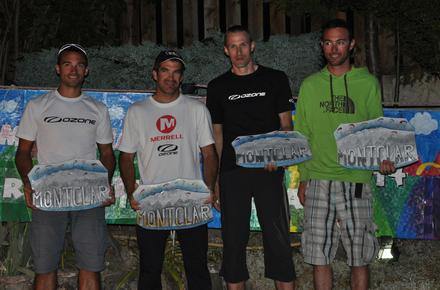 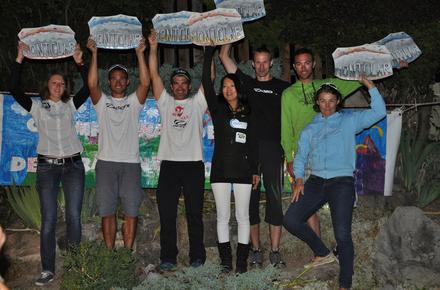 All French champions together! 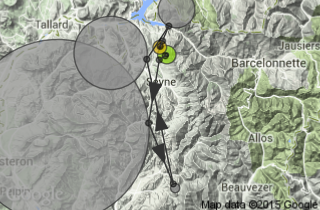 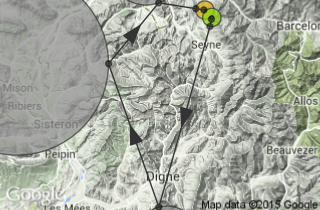 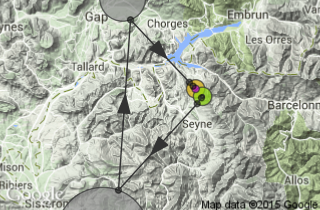 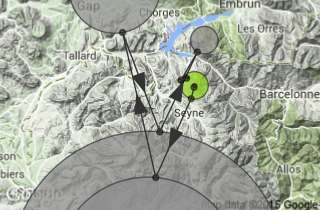