Uttarakhand XC Paragliding is a trial event to check the Potential of the new Paragliding site in India. It is organized by Kumoun Mandal Vikas Nigam ( A Govt Enterprise) & Paragliding Association of Uttarakhand, supported and sponsored by Uttrakhand Tourism Development Board (Ministry of Tourism Uttarakhand)
We will be happy to get attention of Pilots from overseas and country to this new flying site.

Pithoragarh a region in Uttarakhand state of India. Nested in the hills of Kumoun Himalayas, Pithoragarh is cluster of valleys and is also known as Miniature Kashmir, is the most beautiful and appropriate place for paragliding.

Pithoragarh is District headquarter, region in Uttarakhand state of India

Uttarakhand XC Paragliding is a trial event to check the Potential of the new Paragliding site in India. It is organized by Kumoun Mandal Vikas Nigam ( A Govt Enterprise) & Paragliding Association of Uttarakhand, supported and sponsored by Uttrakhand Tourism Development Board (Ministry of Tourism Uttarakhand)
We will be happy to get attention of Pilots from overseas and country to this new flying site. We have selected this site after flying here since more than a decade and discussing with leading Pilots of the country . Paragliding Association of Uttarakhand aims to explore and Develop this sport in Uttarakhand State. Mr Gurpreet Dhindsa will be the Meet Director and Vijay soni will be the Assistant-Meet Director of the Event.

Pithoragarh a region in Uttarakhand state of India. Nested in the hills of Kumoun Himalayas, Pithoragarh is cluster of valleys and is also known as Miniature Kashmir, is the most beautiful and appropriate place for paragliding. Since past decade flyers around the country and abroad had flied here, and were surprised to see such a place is being ignored by the country where there is tremendous possibility of flying throughout the year and called this place as the flying kingdom.
Located at an altitude of 1650 meters in an area of 15 sq.Kms; with the population 70,000 people it is a sprawling valley, also known as soar valley. Surrounded by mountains, the “Soar Upatyaka” of Pithoragarh has expansion of green fields around the main city area along with meandering streams and rivulets render it with beauty and charm that baker description. The topography and climate and geographical situation offer the most friendly conditions for flying a glider. A moderate climate, neither too cool nor too hot, often with temperature maximum 35 degree centigrade and a minimum of 8 degree centigrade during summers and 13 degree centigrade maximum and 3 degree centigrade minimum in winters. Nor does it receives too much of snowfalls to throw life into a disorderly state. It generally records rainfall up to 3048 mm max, and 1777mm min, gliding can be practiced here throughout the year as atmospheric pressure remains constant and breeze is blowing at a normal pace. If spring, summer and autumn seasons are captivating, winter with rainy season too have its own splendor. Where occasional snowfall during winter adds new vigor and rejuvenates life on one hand, periodic rainfall, bewitched clouds, fleeting fog, the rainbow and changing fickle minded weather conditions during rainy season presents an unlatching scene and yield divine pleasure, on the other. Perhaps, its all what a pilot craves for. Pithoragarh offer good conditions even for beginner-pilots. The usual flights are made above the soarlake and along the valley. As Pithoragarh is a cluster of valleys, morning wind is mostly from the East and wind varies SE to SW and West. Usual cloud base during February and March is 2500 - 3500 meters ASL.
Thermal strength in up to 5 m/s. Usual best hours to start is about 11:00. Thermals begin at about 10 a.m. and last until 5 p.m with changing sun face. The conditions are good for flying but sometimes overdevelopment is possible in the afternoon.

Take-off - 1900 ASL (29.3541.6, 80.154585)
The launch ground has exposure south east to south west located in 10km from the nearest town and can be reached by taxi or Jeep. It takes 45 minutes to get there. At a time three launches are possible, there is another slope in case of need, the slope is not grassy in spring. Top landing is not possible at take off, but 300 mtrs down the slope are paddy fields.

Landing - 1400 ASL (29.352048, 80.143254)
The landing is located 3 km from the take off , and 7km from the city at present landing is a non functional airport and landing possibilities are open with paddy fields on both sides.
Flight info
Once above the height of the launch is quite easy (but sometimes bumpy). In order to get to that height, passes across the launch in the best lift are often required. Once below launch height, head towards the landing and you may be lucky and catch a thermal above the spur on the way down which mostly work. When thermalling there are a number of places to head for. Thermals seem to gather above the spurs to the left and right. In general, the whole hill is a trigger point so be prepared for some monster lift straight away. During summer, the lift is quite strong and rough sometime.

Open class is prohibited......
Rs 500 will be the entry fee, Payment will be done upon arrival.
Qualified pilots can please Email their travel plans with dates so that their pick up from rail head can be organised,

Delhi is well connected with Air and Railways , from here there are 3 trains to kathgodam the last rail head in Uttrakhand. By road Buses are available from Anand Vihar to Haldwani / kathgodam and Pithoragarh.

Pithoragarh is District headquarter, region in Uttarakhand state of India
For event we will provide pick up and drop from Kathgodam and Tanakpur last rail head and pilots coming from Nepal at Banbasa/ Tanakpur.

Nearest local airport is Pant Nagar in Udham Singh Nagar district from Delhi. There you can get a local flight from Delhi international airport. 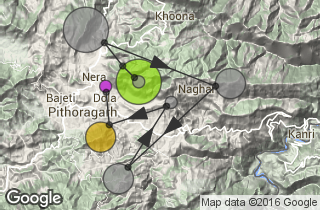 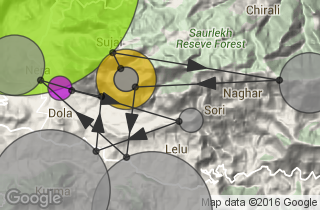 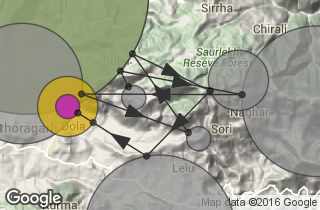 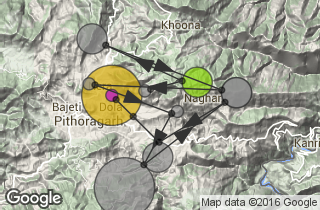